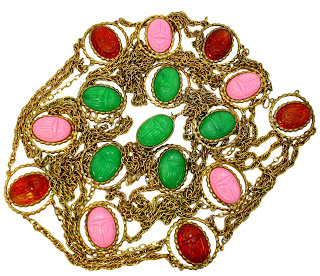 Juliana D&E made a number of Egyptian style designs.  In a number of them they used different plastic scarab cabochons.  Many of these scarab designs can be found in my book Juliana Jewelry - The Last Generation in the Egyptian Revival Chapter.

The most commonly used was done in belts in many different colors.  The first photo shows three different belts showing a some of the colors this belt. These scarabs are hollow plastic.  I have seen them in pink, topaz, green, and turquoise.  However other colors are possible. 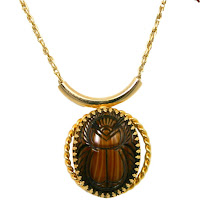 The next scarab D&E used was a solid hard plastic design.  It has molded accents on the front and the back of the cabochon.  I have only seen this in the marbled black/topaz coloration.  This scarab was used in a shaped a cut tubing necklace accented with a twisted metal framework.  The back of this design is just a pretty as the front.

The third scarab is also a topaz design but it has a different scarab design on it. It was used with a cast Pharaoh with wings.  It is also a two sided design. 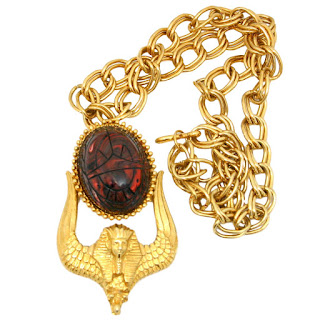 The final scarab design is a new one found when the collection from Mr DeLizza's factory came out.  It is a multi-colored scarab in a much smaller size than the others so suitable for earrings.  Finding these earrings makes a person wonder if the other designs also could have had earrings done in this smaller sized cabochon.  It also a two sided design.

All of these scarab designs can also be found in the online database of confirmed Juliana Jewelry http://isitjulianajewelry.com/

I have several of these scarab design for sale in my store. Juliana Scarab Cabochons

All of my jewelry in available in my store:https://www.ourvintagerosejewelry.com/

Posted by Our Vintage Rose Jewelry at 4:22:00 PM
Email ThisBlogThis!Share to TwitterShare to FacebookShare to Pinterest


One of the most popular of the stones Juliana used are the "Easter Eggs" which are really Stippled Cabochons.  They were only used in three different colors in D&E jewelry with other colors of them only found in one design made in the later years of D&E.

The first design I am going to show you is an extremely rare design it was made by D&E during the brief time D&E did work for Coro/Vendome .  D&E started working for Coro/Vendome in 1962 and only worked for them for a few years so my guess is this design was made in 1963 or 1964.  Marked Vendome both on the necklace and the earrings.

This next design uses the purple/blue easter eggs.  These cabochons were done with many different colored accents including blue/fuchsia and blue/green. They made many different variations on these with collars and bibs along with a wide variety of brooches, pin pendants, bracelets and earrings.

The third D&E design is one using the white.  The variety of rhinestone accents they used with this color is just mind boggling.  When looking at all the designs with the different accent stones you would think it is a different center stone as the different accents bring out different colors from the stone. As with most designs they also made a huge variety of variations in the necklaces, bracelet, brooches and earrings.

In the later years of D&E jewelry they did one design that used many different colors of the stippled cabochons.  Shown is an example with 4 different cabochons.  3 of them are Easter Eggs, the other is a green foiled cabochon. I have seen other colors of cabochons used in this design.

As with most D&E stones they were not the only manufacturer to use these stones. Judy Lee is one designer I know used them.

Most of the known "Easter Egg" designs can be found in the http://isitjulianajewelry.com/  database.  Use stone type: Painted (hand/transfer)