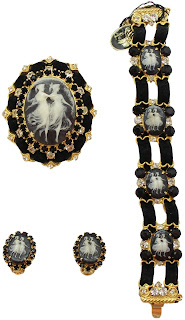 Juliana (D&E) did a ton of cameo jewelry throughout the full history of the company.  This blog will show highlights of the cameos throughout their history focusing on ones you don't see that often.

This first cameo is unusual in that it has ribbon framing around the cameo and also threaded as the chaining on the bracelet.  There is also a matching necklace to this design.  I have also found this design done in an orange/topaz color, and green color.  The bracelet of this design is extremely hard to find. Mr DeLizza talks about the problems with these ribbon designs in is book Memoirs of a Fashion Jewelry Manufacturer on page 85. Which dates these to 1967-69 time frame.  They did not sell many of them as store owners were afraid the velvet ribbon would get dusty and dirty sitting on the counter. 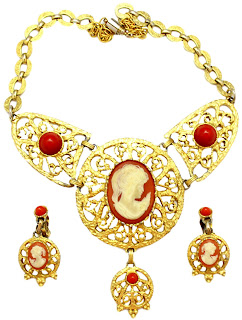 This second is a later design first seen in 1972.  It is done with a cast metal jointed frame accented with cameos, and high domed cabochons. So far found are this topaz/orange design in gold tone and a black/white in silver design.  This is a large bib style necklace and both dangle and button earrings have been found.  The black/white silver design is seen in Mr DeLizza's book Memoirs of a Fashion Jewelry Manufacturer on page 119. This cast necklace frame was also used in designs without cameos.  Instead of cameos they use marbled high dome cabochons. 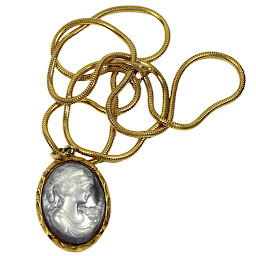 Next is another newer design that was found in the jewelry from Mr DeLizza's factory.  It is a simple cameo pendant done in a gold toned frame.  It is the only one found so far but their are probably other examples of it probably with other cameo colors.  This same frame was also found in his factory collection but done with the rose limoge cabochon talked about last week.

This next brooch is a really fun later design.  It is also pictured in my book Juliana Jewelry - The Last Generation on page 34.  It also a cast design and quite large making a statement 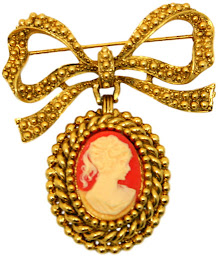 when worn.  The bow is jointed to the cameo so that cameo can freely dangle. This same bow top was also used in other D&E designs.

Many other cameo designs can be seen in all four Juliana Jewelry books. Most are also shown in the http://isitjulianajewelry.com/ database.  Use Jewelry Type: Cameo to see them all.

There are a number of different cameo designs available for purchase in my store: https://www.ourvintagerosejewelry.com/